Hereford Tyres is proud to be part of the Point S group of Independent Tyre Speciallsts.

We are the first UK independent tyre Company to achieve Michelin Certified Centre status,  retaining our award annually in recognition of our high quality customer service and expertise.

In line with industry standards, Hereford Tyres does not recommend using part worn tyres. The article below, published by TyreSafe, the UK's leading tyre safety group, details the key points for concern and their research found that in addition to the safety concerns, part worn tyres represent poor value for money: 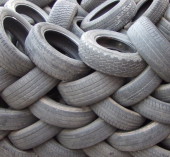 Cash-strapped drivers are putting themselves, their passengers and other road users at serious risk of injury by opting for part worn tyres, according to campaign group TyreSafe.

The group has issued the stark warning following a month-long nationwide investigation where it purchased a random sample of 50 part worn tyres. The tyres were inspected by an independent tyre expert and the alarming results found that 98 per cent of the tyres were being sold illegally. But more concerning was that over a third of the tyres were found to contain potentially dangerous forms of damage or non-compliance.

Indeed, one tyre was described by the inspection engineer as having the "potential to kill" as it still contained a metal object penetrating 5cm through the tread in a manner which was likely to result in sudden and total tyre failure had it been fitted to a vehicle.

Other serious safety breaches included dangerous and unsafe repairs, exposed cords, bead damage and evidence of runflat damage. "Although a number of clear regulations exist which permit the sale of part worn tyres, it's obvious from our investigation that these are not being adhered to," comments Stuart Jackson, chairman, TyreSafe. "Not only are drivers putting their own lives at risk, but they are also endangering their passengers, which in many cases may be their children, and other road users. Before buying part worn tyres I would urge drivers to ask themselves if the risk of buying part worn tyres is really worth it?"

With motoring costs reaching record levels, a growing number of drivers are choosing part worn tyres in the belief that they offer better value. However, TyreSafe's investigation also disproved this myth as it found that the average cost per mm of useable tread of the part worn tyres was £6.33, whereas the comparable cost when selecting an equivalent new tyre was 16 per cent lower at £5.32.

"Even if properly marked, it is impossible to know the history of a part worn tyre which makes it extremely difficult to be sure about its internal condition and safety credentials," continues Jackson. "With rigorous quality controls on all new tyres, fitting these as replacements is undoubtedly the safest option. What's more, as our investigation showed, it's often the best value too."